Grendal is a strange and seemingly very powerful Drow. He was originally encountered in Kibwe on a mission to deliver part of a map from Ducal. Initially, Grendal appeared to be another Slave in service of Mazani Unta of the Bekyar tribe. This guise was clearly half-hearted however, as he detected with numerous powerful arcane magics. During the following discussions, Grendal had complete control over Mazani, claiming that it was not magical in nature – but instead raw fear.

He offered a strange deal. Using the map that was delivered, he requested the party enter the mines of Kibwe and locate a particular magical portal. Once located, he agreed to save New Limit, as well as give them an astounding 350 slaves. His motivations are completely unknown at this time. 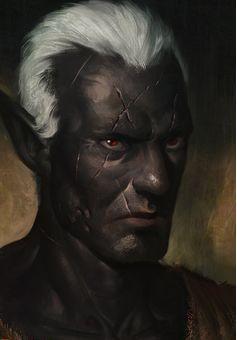