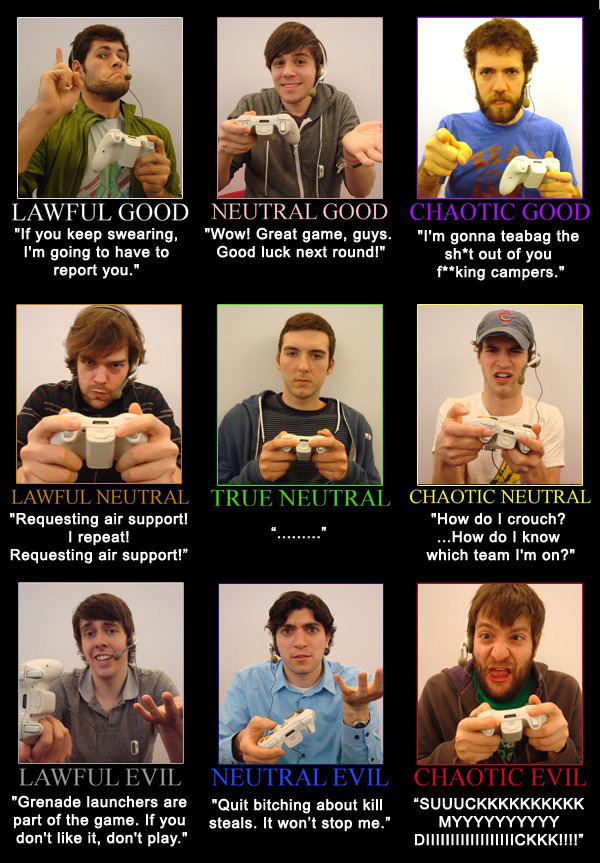 Alignment is a curious creature; it summarizes the philosophy and morality of a person, and yet no two characters with the same alignment are exactly alike. Still, alignment says much about a character’s soul and the way she interacts with others. Each alignment has a list of philosophies or doctrines that characters may follow, together with a list of core concepts to bear in mind while playing a character of a given alignment. You could decide that one word is particularly crucial to your character-be that justice, greed, or self. You’ll find that some of these words appear in more than one alignment. To one person, “freedom” may mean freedom for herself and others, while to another, it may mean freedom to take what she wants.

When thinking of alignments , use a simple test: How would the character treat a stranger in trouble? A chaotic good person who sees a stranger being robbed would rush to his aid-a person in distress needs help. A lawful good character would move to take over the situation and see justice done . A neutral character might stand back and watch developments , acting as she sees fit on this occasion, and perhaps acting differently the next time. A chaotic evil character would join in, and perhaps try to rob both the victim and the robbers. A lawful evil character would hang back, waiting for the fight to end, and then take advantage for his own gain or that of his god or cult.

When a character performs an action that is out of character for his listed alignment, the GM decides whether the action is enough to shift the character’s alignment on the appropriate alignment track, and if so by how much. Executing a captured orc combatant so the PCs don’t have to haul it to a distant prison may only be 1 step toward evil; torturing a hostage for information may be 2 steps. For minor infractions, the GM can just issue a warning that further actions will cause a shift on the alignment track. Extreme, deliberate acts, such as burning down an orphanage full of children just for the fun of it, should push the character fully into that alignment, regardless of the character’s original position on the alignment track.

Alignment Change
When a character’s position on an alignment track shifts into another alignment (such as from 3 to 4 or 7 to 6), change the character’s listed alignment to the new alignment. The character takes a -2 penalty on attack rolls, saving throws, and checks because of guilt, regrets, or bad luck associated with abandoning his previous ethics. Note that the character is still “on the border” of his previous alignment, and later actions could make him shift back to his previous alignment. This penalty is reduced by 1 every 2 weeks, but can stack upon itself if multiple changes are made in quick succession so after an alignment change, it is in the character’s best interest to act in accordance with that new alignment, embracing his new beliefs and philosophy. This penalty is in addition to any other consequences of changing alignment (such as becoming an ex-cleric or ex-paladin).

The mechanism for strengthening a character’s position within a particular section of the alignment track requires greater effort than acting out of character. A person who is a little bit good (3) has to work hard to become very good (1) even a lifetime of mildly good acts is insufficient. If a character makes a great effort toward promoting or maintaining that alignment, the GM should decide whether that merits a shift toward one of the “safest” points on the alignment track (1, 5, and 9) where most out-of-alignment acts don’t risk an immediate alignment change. This helps prevent players from gaming the system by offsetting minor evil acts with an equivalent number of minor good acts to remain within the good section of the evil-good alignment axis.

Atonement
Using an atonement spell moves the character’s position on the alignment track the minimum amount to return the character to his previous alignment. For example, a fallen paladin using atonement to become good again shifts her position on the good-evil track to 3, even if she originally was at 1. The spell is a means of reversing the worst of an indiscretion, not for gaining a safe buffer within an alignment zone on the track, and this gives the character an incentive to work toward entrenching herself within the tenets of the restored alignment. Using the “reverse magical alignment change” option of atonement does not give the target the normal alignment-change penalty on attack rolls, saving throws, and checks, but accepting the “redemption or temptation” option does.